From the trash heap of golf to good form

Well, I had an essay all drafted called “And that Concludes The Golf Project”, explaining why I quit the game. It was not an impulsive decision. I was becoming miserable from my game, losing more than a dozen balls per round due to snap hooks. I told all of my teachers, and they were encouraging me to not quit.

But I was at me wits’ end. I could not find any golf instructors that suited my needs. Going to expensive famous teachers is good only for elite players who can afford them. One must have a frequent instruction interaction to improve.

Then, right as I had sworn off the game (and was in a stage of grief as if a loved one died), a PGA professional gave me a couple of names for instructors to try. I chose Warren Bottke, the head instructor at PGA National in Palm Beach Gardens, because he had taught Brooks Koepka from age 10 to 18.

I had my first lesson only three days ago. I told Warren that I expected the session to be a waste of time and apologized in advance. I just wanted to go over general philosophies, such as “Why is my backswing uncomfortable?” It is important that the student communicate to the instructor.

We were on the exact same page, which was encouraging.

We addressed the backswing first. I have been able to achieve a backswing that looks like Tiger Woods’ in photos. However, the dirty little secret has been that it has never felt natural. I was a fraud.

Sure enough, my wrists were all wrong in the takeaway. Warren got me radially deviating sooner in the takeaway (i.e. cocking the wrists). That let me take it to the slot at the top of the swing in a fluid fashion without a hitch. In the second photo from the left, that position is so much better. Fixing this alone was worth the cost of the session. 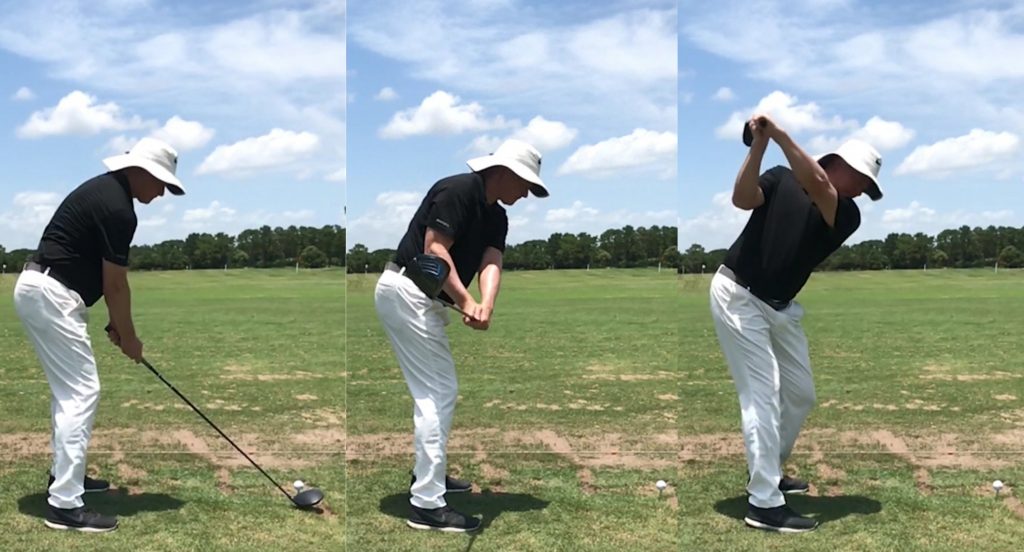 Also, in the swings from the last month, here, you see that I have experimented with a flying right elbow. I do not think that I need that.

Although we focused on the backswing, Warren did show me how to make a proper transition too. I had to sleep on it to process it. I had an idea the next day.

The key to the transition is to visualize sliding the hips left, toward the target (not visualizing twisting them). It feels as if you are incorrectly swaying, but the hips actually turn as you post up to the left leg nicely.

I had discovered this on my own a long time ago (see here and here), but promptly forgot all about it as I had so many other things wrong. It has been like whack-a-mole, fixing one swing flaw, then another. As I progress and reach a critical mass, the steps forward are not being forgotten. I am retaining these insights.

So, after just one session with Warren Bottke, I have, for the first time in 35-years, a comfortable backswing. I also know what the transition should feel be like. I need to hit a few thousand balls to allow me to combine a good tempo backswing with this hip-slide transition without having to think about it.

I am definitely back and out of retirement; From the trash heap of golf to high upon the hill.

Post Views: 255
This entry was posted in Backswing, Essays and Philosophy, The Full Swing, Transition. Bookmark the permalink.