The pilgrimage to Harmon Floridian

As I have written about previously, I have zoomed in on the most important part of the swing for a good player, which is the transition move to get the hands and shaft flat before the shoulders start to turn around. Our instincts are to fire the torso before the hands, which then gets the hands too far forward and out of plane.

The best players in the world struggle with this. The current Number One, Justin Rose, has a pre-shot routine where he pumps the hands down. He is reminding his body to move the hands in the transition.

Well, I tried and tried on my own to get this move down-pat and failed. I was doing it all wrong, as you will learn, below.

I knew that some of the best players to make this move I sought (i.e. The Holy Grail for me) were all coached by the same people in Florida at the Harmon school, led by Butch Harmon and son Claude. So, I said to myself, “Enough is enough. I turned 51 and do not have all the time in the world. I need results yesterday.”, and then called up the Butch Harmon Floridian school.

They were extremely expensive, but I paid the price. I made the pilgrimage. 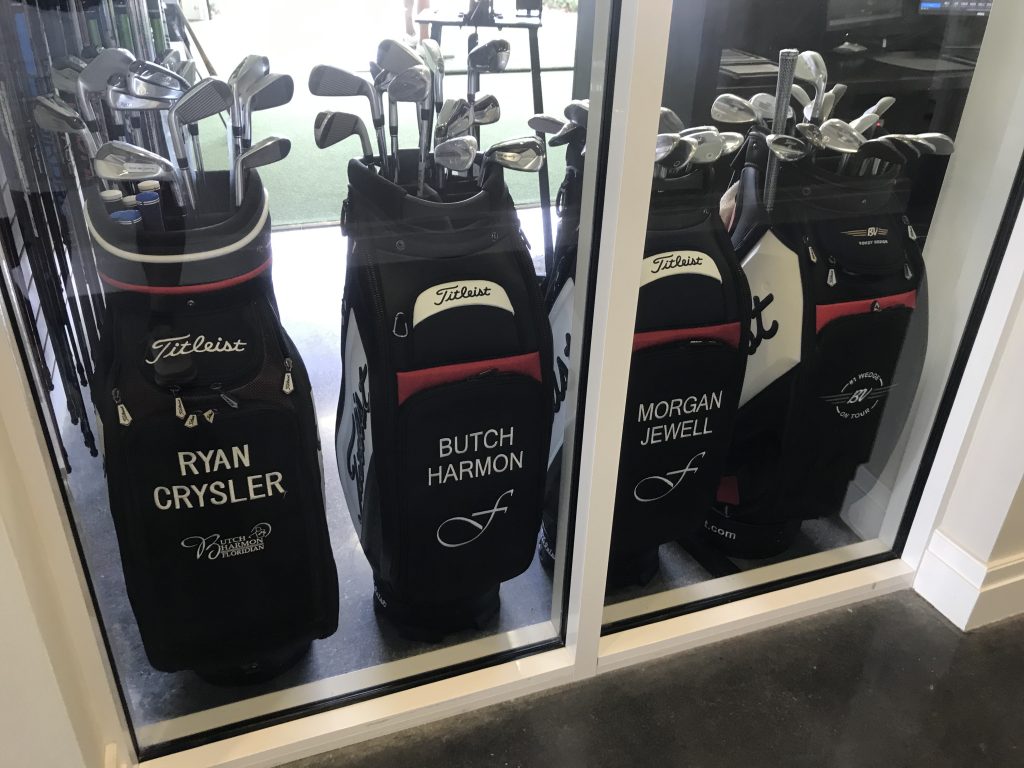 Before going to Florida, my instructor, Ryan Crysler, insisted that I undergo a performance screening in Ohio to determine my flexibility. A good teacher will customize the swing goals based on the individual body limitations.

I arrived in Florida and was very impressed with the teaching facility. It has great indoor hitting studios for the swing and putting. They have the 3D measuring equipment and, of course, Trackman. It is also clean. I see these types of hitting rooms become cluttered with junk too often.

The outdoor range was as good as you can get. They even have a small practice course to teach on a golf course setting. That is an idea I had come up with on my own and might build in Ohio. 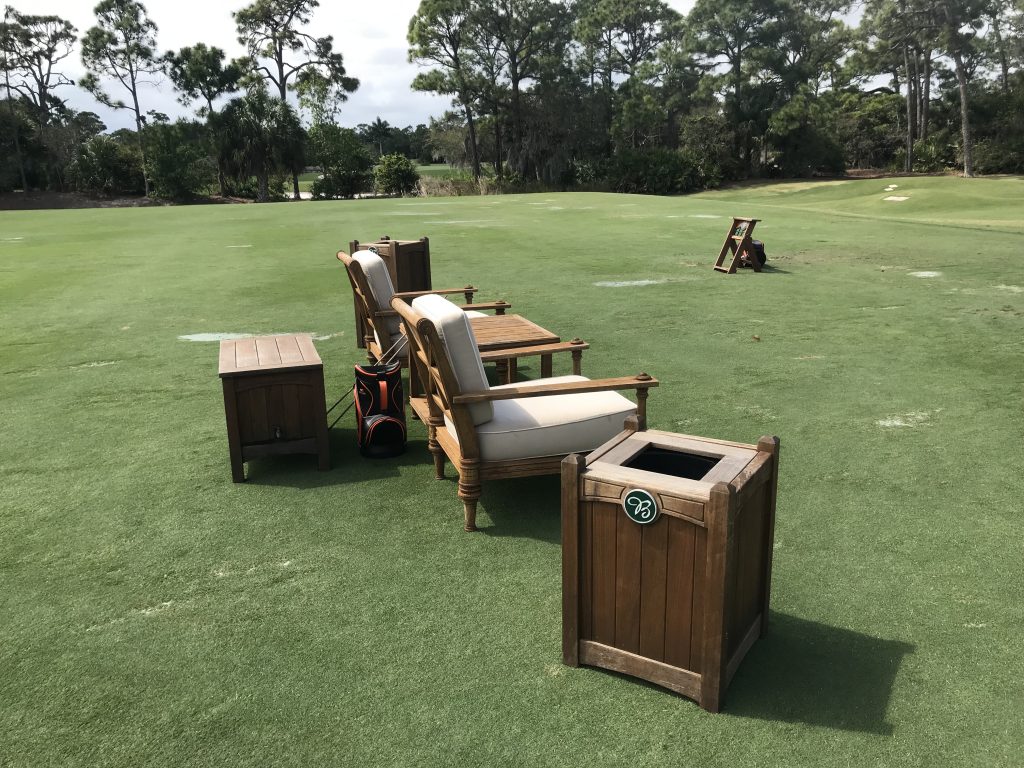 However, this was not your typical teaching session. Before I arrived, I had sent them my stories and videos and told them exactly what part of the golf puzzle I wanted to figure out. I believe this creates a higher yield result. A player needs to take responsibility for their own swing.

So, on Day#1, Ryan did more analysis of my body and then we measured my swing in 3D using K-vest technology. I was out of practice, having not hit balls for a week, so my old bad habits were back in form.

On Day #2, we stretched some more. Modern instructors of playing professionals strongly believe in stretching and exercises to activate certain dormant muscles. In my case, they thought that my gluteals were not firing.

Then, we began to work on the swing. Ryan suggested that I go with a shorter backswing like Jon Rahm. I was pleased to hear that, because I have long thought that that was my best natural swing. I had tried this in January out in Arizona.

First, as I suspected, my grip had become too strong, which was preventing me from having a flexed left wrist at impact. We weakened it and I had to learn how to bend my right elbow sooner in order to accommodate this new grip.

We also used the one-foot drill to prevent my hips from sliding. Placing my right foot behind me, resting on the toes, I took half-swings with a 7-iron. I hit some great shots that had to go 170-yards: Not bad for an old man, on one foot, with a half swing.

But the Holy Grail remained elusive. How do I get all of that transition action like the greats?

Because I had emphasized in email exactly what I wanted to accomplish, I believe I helped my instructor deliver results. You should try this. Get to know your swing so you can communicate to your instructor better.

I finally learned what I was doing wrong! I had been getting the hands and right elbow lower by dipping my spine to the right. Well, that wreaks havoc in the sequence of the gears of the body. My hips stall and my upper body gets stuck to the right. It makes it damn near impossible to make contact.

Instead, what I learned to do was to relax the right biceps, extend the elbow, and pump both triceps and latissimus dorsi down to lower the club. From here, the body can easily turn and take the club at a proper path to the ball.

Using my valuable tricks that I have learned on how to implement a radical swing change, I tried this new motion with a pause drill. Then, I used extreme slow motion.

Boy oh boy, did it work! I hit an 8-iron with absurd accuracy. There was a target pin 140-yards away. With only a slow-motion swing, I hit about 10 golf balls to within 10-feet. 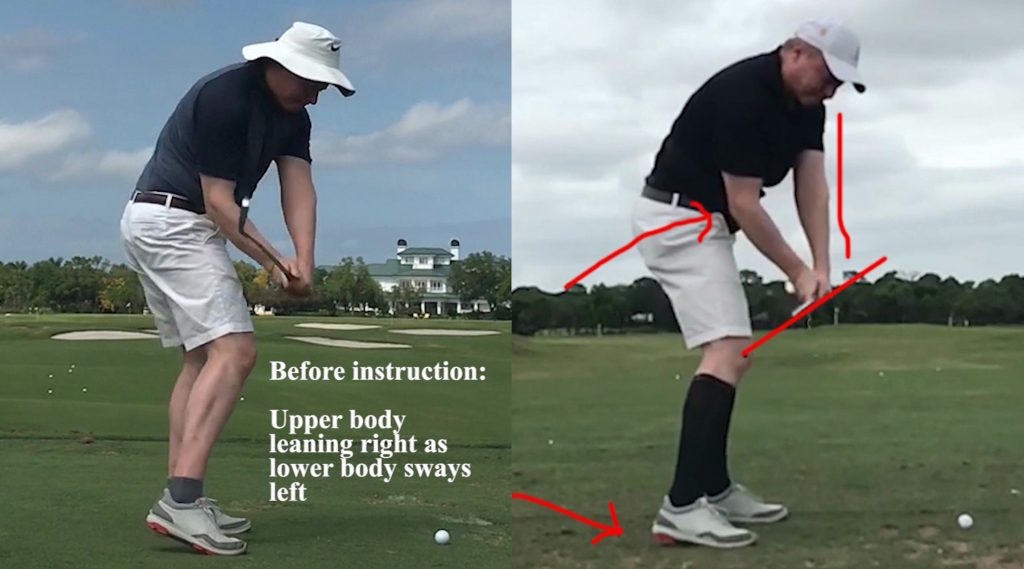 Now, I need to go to the range a few more times. I am quite confident that I can develop a swing like Jon Rahm or J.B. Holmes.

All in all, I would say that this trip was literally a “mission accomplished”

Update March 22, 2019- After four practice sessions since the lessons:

Post Views: 673
This entry was posted in Essays and Philosophy, Transition, Travel and Courses. Bookmark the permalink.