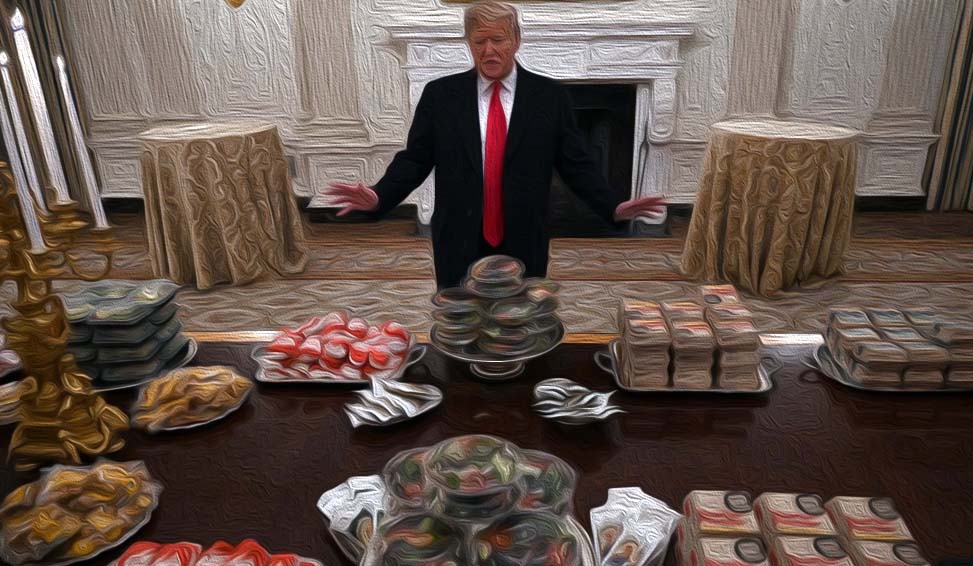 Making the mainstream news headlines is how President Trump fed the visiting Clemson football team a variety of fast food sandwiches as they visited the White House. He was likely trolling the Obamas who banned fast food.

But Trump really eats this garbage himself. That is why he is obese and takes amphetamines to lose weight.

Our president is literally being poisoned by the sugar in that fast food. The buns and fries are laced with sugar to addict people. The food industry has long known that sugar sells, even when concealed in what appears to be a meal. It increases hunger by spiking insulin.

Like millions of Americans, President Trump is stuck in a vicious cycle and nobody around him cares enough to tell him. His senior advisors do nothing. He has the best team of chefs who could control every bite of food he eats, but he is too hooked on the sugar.

This is like watching old Elvis deteriorate while his entourage watched.

It is so vulgar to watch people eat bad food. It’s like watching a smoker or an alcoholic.

While President Trump has genetics that seem to have held at bay diabetes and arteriosclerosis, his obesity will cause him to develop joint arthritis and back pain. He will also lack the energy required tun the nation, unless he is fueled by drugs.

The good news for President Trump is that he could lose 50-pounds by July 4th if he did these simple things:

Post Views: 636
This entry was posted in Essays and Philosophy, Nutrition and Exercise. Bookmark the permalink.