I have improved even more since my October post, below, where I got to 115-mph club speed. Holy cannoli.

The weather today was 60-degrees and low humidity- Perfect. I could actually make it through an entire Bottke session without becoming delirious from heat exhaustion.

At the end, for the first time ever during a session, I pulled out the Mevo to measure club speed. I hit several that ranged from 117 to 121-mph. Wow. 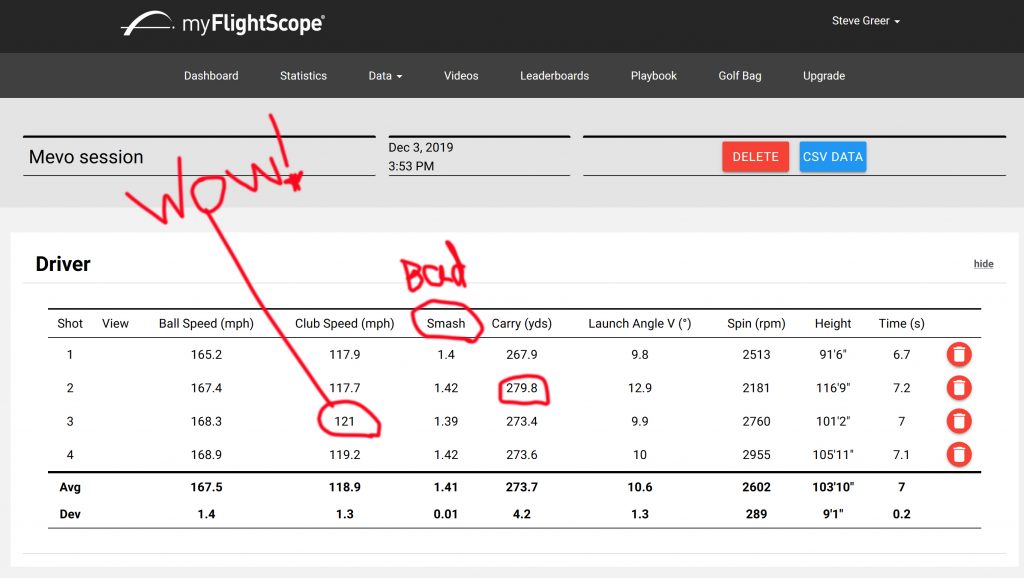 I can do much better too because I was early releasing. I can feel the wasted dissipated energy that I am still not fully harnessing.

I expect to have elite speed of 125 soon. How does that compare?

My speed improvement is 100% due to form. I am weaker now than I was in 2016, by far. I have not bench-pressed in 8-months. I just do body weight exercises.

I have been on a plant-based diet for a month. It can’t be hurting me!

(I have also lost 20-lbs in five-months without trying.)

This has been a brutal summer in hot Florida. I actually quit the game briefly. It is by fluke that I was salvaged from the scrap pile by Warren Bottke.

I am pleased to announce that I am close to achieving an efficient modern swing. I had to learn how to deprogram my brain from wanting to hit like a baseball bat swing.

I have not bothered to check my swing and ball speeds in months (Placing Trackman-like devices behind a person trying to learn a new swing motion is the worst thing anyone can do). However, the ball has been popping off of my driver in ways that I have never felt before. On the course, I occasionally get good distance too. So, I measured by speeds today.

I dusted off my Flight Scope mevo. It was malfunctioning, not recording, when I hit pure stripes. By the time I got it to work, I was in poor form. Nevertheless, I still achieved a swing speed of 115-mph for one swing. Again, those were bad swings too because I revert to my old baseball ways when I try to hit it hard for Trackman.

My previous barrier had been 110-mph. Because I was sticking to my right leg, as a baseball player does, my hips and body aborted the turn prematurely. I dissipated all of my energy long before the club reached the ball.

I have always been confident that I could swing faster than I was with the driver because my irons were fast. Imperfections in the swing are amplified in the long sticks and show up as slow speed. I knew that proper form would pay off. It has.

Golf is an amazing sport like no other. People of vastly different builds can hit the ball far if they have proper form. It is not about height or muscle mass. Don’t let anyone tell you that you cannot hit it far.

Post Views: 895
This entry was posted in Essays and Philosophy, Nutrition and Exercise, The Full Swing. Bookmark the permalink.